Active themes
Total posts
Active users
Careful, Counterfeit! Supposedly affordable offer as an expensive mispurchase - we clarify!Copy URLDone
Buying VCDS - Where can I purchase a VCDS diagnostic system?Copy URLDone
You can acquire our various VCDS diagnostic kits directly from our online shop or one of our selected specialist retailers.
What are the differences between HEX-V2, HEX-NET and HEX+CAN-USB?Copy URLDone
There are three different hardware versions:


With the Ross-Tech HEX-V2 and the Ross-Tech HEX-NET you can diagnose all diagnosable VW, Audi, Seat, Skoda & Bentley vehicles starting from model year 1992 to the latest models. For separate, and especially older models / other brands (for example Linde) additional adapters are optionally available.

The tethered HEX-V2 supports a classic USB connection, the HEX-NET additionally offers a new level of reach and comfort with its wireless Wi-Fi function.

The other tethered diagnosis interface, HEX+CAN-USB, supports all diagnosable VW, Audi, Seat, Skoda & Bentley vehicles from model year 1992 to 2015, sometimes also vehicles from model year 2016 (depending on the installation of the respective control devices). It is especially suited for private use and is available in our online store as a refurbished second-hand article.
Are VCDS software updates subject to a charge?Copy URLDone
VCDS software updates are not mandatory, not bound to a certain duration and are free of charge for an undetermined amount of time (at least 12 months after the purchase). The latest VCDS version can always be found on our Downloads page:

What does "free of charge for an undetermined amount of time" mean?
Ever since the VCDS diagnosis system has been on the market, the software updates have been free. Since phrases like "free updates for life" are not legally valid due to the non-defined timespan, we guarantee free updates for at least 12 months after purchase. In practice however, the VCDS software is not and has never been subject to a charge since it launched onto the market in the year 2000.
What does 3 VIN, 10 VIN and Professional version mean?Copy URLDone
In the latest VCDS diagnostic systems, HEX-V2 and HEX-NET, you can choose between the Enthusiast Versions (3 VIN / 10 VIN limitation) or the Professional version (no VIN limitation).

The Enthusiast versions are especially suited for newcomers or amateur users. They are much more affordable due to the limited number of diagnosable vehicle identification numbers (VINs). An upgrade to the Professional version is possible at any time.

The Professional version is especially suited for workshops and professional users because an unlimited number of VW, Audi, Seat, Skoda & Bentley vehicles can be diagnosed.

The HEX+CAN-USB interface is only available in the unlimited Professional version (without VIN limitation).
Buying a second-hand VCDS - original or counterfeit?Copy URLDone
Unfortunately, customers who buy a VCDS system from private vendors in good faith fall for counterfeits time and time again. Important clues and pictures can be found on our counterfeit page so you can quickly recognise a counterfeit.
What is MOST?Copy URLDone

Do I have to register VCDS?Copy URLDone
The interfaces HEX-V2 and HEX-NET must be registered with the maufacturer of the software (Ross-Tech LLC.). Only then can they be used fully. An internet connection is required for the onetime registration process . Here is a registration guide.
When is a VIN used in my HEX-NET / HEX-V2?Copy URLDone
Query before saving a VINCopy URLDone

If you are in possession of a VIN-limited system (3 VIN or 10 VIN) and use a function that requires the use (saving) of a VIN, VCDS will explicitly ask if you really want to save the VIN. The VIN will only be saved in VCDS after confirming this: 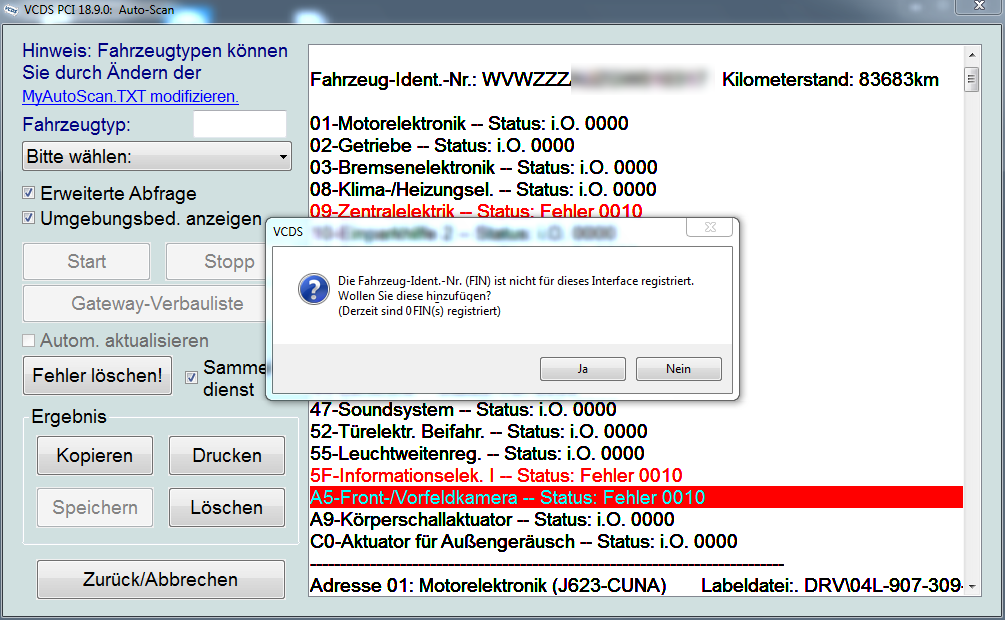 Can used up VINs be deleted again?Copy URLDone
No, that is not possible. Should you be in possession of an Enthusiast version (3 VIN or 10 VIN) and have used up the amount of activated vehicle identification numbers, it is possible to upgrade to the next higher VIN number / the Professional version. Of course, you can edit your saved VINs as often as you would like.

An affordable VIN upgrade can be acquired here:

Regardless of that, both versions can be installed on 32 and 64 bit Windows versions without problems. Please be aware of the system requirements. The latest VCDS versions in German and English can always be found on our Downloads page:

Can I use VCDS on multiple PCs?Copy URLDone
Yes. VCDS is multi-workstation capable. This means the software can be simultaneously installed on numerous PCs.
The VCDS license is included in the dongle. The PC (or the smartphone in case of HEX-NET) connected with the dongle is the one you can work with. Please be sure to always execute a connection test for connection with the dongle.
Does the PC require an internet connection for the diagnosis?Copy URLDone
No, an internet connection is not required during the vehicle diagnosis.
Can I install VCDS in German and English simultaneously?Copy URLDone
Installing both versions on the same computers is possible. Working with both software versions at the same time however is not possible, since only one of the versions can be executed at a time. In this case, please ensure that all used computers have the same VCDS software version installed.

The latest VCDS versions in German and English can always be found on our Downloads page:

Is VCDS compatible with other programs on my computer?Copy URLDone
Usually, VCDS runs on any PC without problems or errors. However, please note that with certain software / hardware (for example Arduino), it may not be possible for VCDS to be executed properly.
What is the password for VCDS-Mobile?Copy URLDone
Short and crisp: password 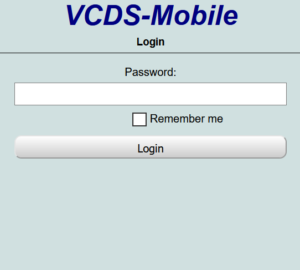 VCDS window too large - how can I shrink the VCDS window?Copy URLDone
On the VCDS screen, right-click on the small VCDS symbol in the top left corner. A window will open in which the window size can be reset as follows: 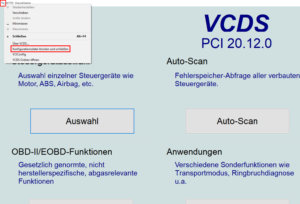 Can VCDS be used on devices with ARM processors?Copy URLDone
At the moment, we can not guarantee unrestricted use of VCDS with ARM!
The software manufacturer is already testing its usability. Here are some recent conclusions:


All information here is subject to change! At this time, using ARM processors with VCDS is not recommended!
Does VCDS work with Windows 11?Copy URLDone
VCDS is supported by the current Microsoft operating systems.
For detailed information see: VCDS System requirements
Which vehicles belong to the platforms MQB Evo and MEB?Copy URLDone

Can I change my kilometre reading (speedometer adjustment) with VCDS?Copy URLDone
No! However, a new instrument cluster (new = less than 100 kilometres) can be adjusted to the mileage of the vehicle once.
What is the difference between the blue and the black HEX-NET?Copy URLDone
The manufacturer Ross-Tech has developed a reworked version of the black HEX-NET interface. The following small changes have been made to the succeeding model: Do I require a new interface?
No. Diagnosis of all new vehicles is still possible with a HEX-V2 or a black HEX-NET. The devices will also continue to receive the latest firmware updates. We have already successfully tested this with a HEX-V2, a black and a blue HEX-NET in the following video:

Is it possible to upgrade?
No. The black HEX-NET includes the same basic functions as its successor. When used on current vehicles, it is equal to the blue HEX-NET. For this reason, an upgrade is not currently possible.
Can I also work on vehicles of other brands with VCDS?Copy URLDone
VCDS supports all diagnosable VW, Audi, Seat, Skoda und Bentley models from 1992 up to the latest model year. In EOBD mode, VCDS enables relevant emission-related diagnosis functions spanning multiple brands (for example BMW, newer Opel models, French brands, many Asian brands and much more).

VCDS is not purely an EOBD program and was never developed with this focus in mind, therefore not all EOBD functions can be guaranteed. You can find a list of currently supported EOBD vehicles in our VCDS discussion board.
Are the VCDS diagnostic systems from PCI Diagnosetechnik protected against the "aftermarket radio problem"?Copy URLDone
Multiple accessory-radio manufacturers (for example Sony, Pioneer, Kenwood) assign the + 12 V output for the electric antenna to the diagnosis pin in the vehicle radio connection. This causes a communication error in the diagnosis cable.

The VCDS hardware is protected against overvoltage and short circuits. Therefore the “aftermarket radio problem” only affects older vehicles with K-line and does no longer appear in vehicles starting model year 2003.
Can I flash-program my engine control device (chip tuning)?Copy URLDone
No! Due to different encryption methods of VW, Audi, Seat, Skoda and Bentley vehicles and problems with the copyright of the versions, this is not possible. Therefore, changing the boost pressure, start / rate of injection, RPM limiter and speed limiter, etc. is not possible with VCDS. Seek out a chip tuner who can surely assist you in this case.

Do I require anything else other than a VCDS system?Copy URLDone
A workshop manual in which functional sequences and steps are described can come in extremely handy. VCDS is a precision tool, not an online repair manual. Due to the sheer amount of different vehicle models, we are not capable of documenting all required and possibly model-year-dependent steps. In the following, you can find important information.

Application of the diagnosis:

Will I also receive access to Ross-Tech’s English discussion board with a VCDS diagnostic system from PCI Diagnosetechnik?Copy URLDone
Yes, you will receive access and be recognized as a “verified member”.
How should I proceed if my VCDS interface has been damaged?Copy URLDone
We offer individual repair kits and replacement parts for installation to experienced users; these can be found in our online shop. Alternatively, you can send us your diagnosis system for repair at any time. Enclose a short, written description of the error as well as your address and your telephone number in the package and send it to our address: 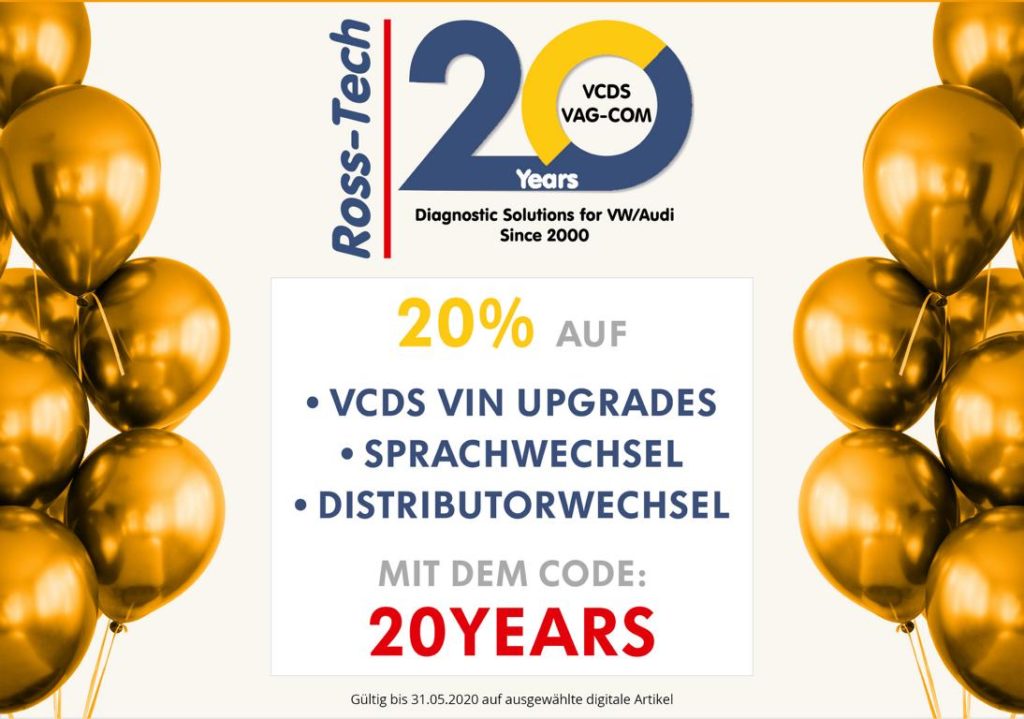